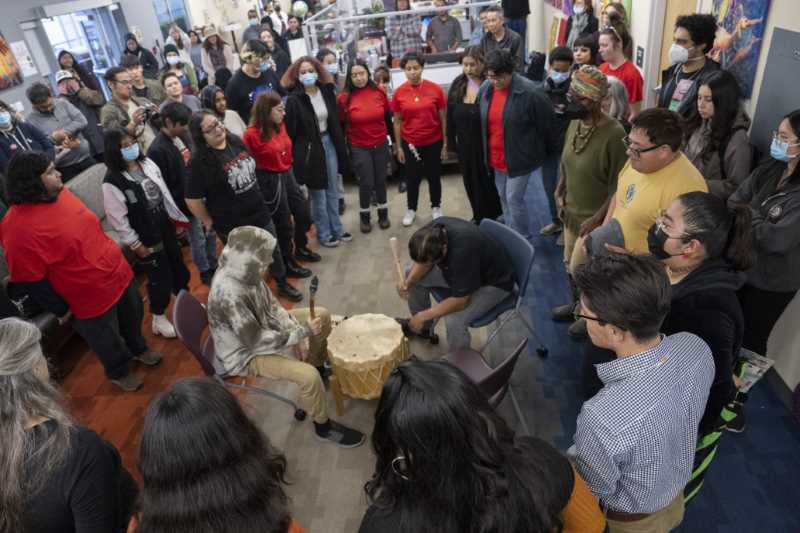 A Student Club that has existed for more than two decades finally got its dream of having a full-fledged student support center for those identifying as having indigenous ancestry. The First Peoples Native Center is open now and located in the Equity Center, offering its students a study space and several support services. 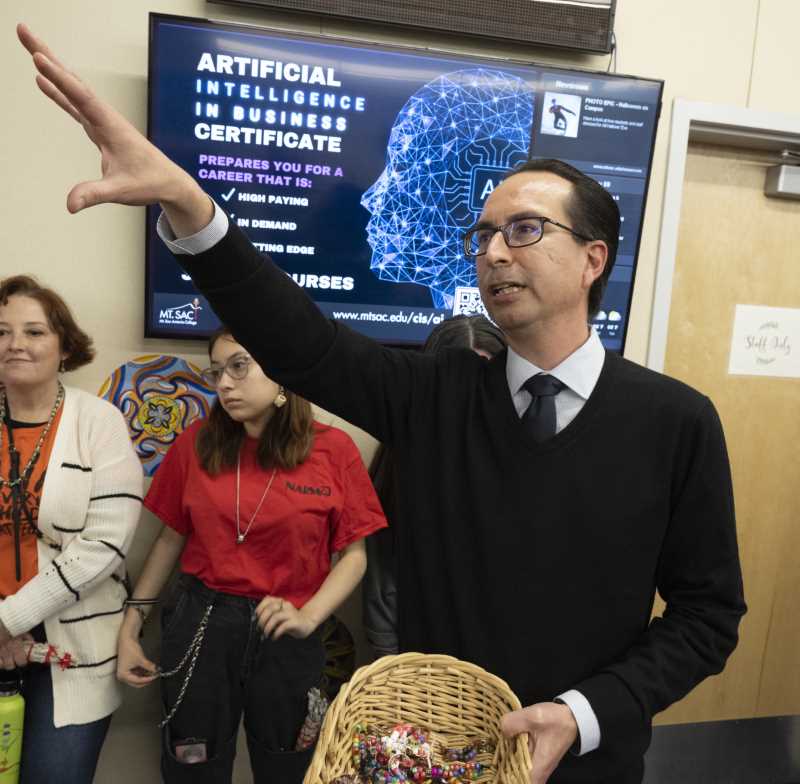 “It is an open center,” said Associate Dean of Equity, Eric Lara. “Not a program that a student must sign up for." 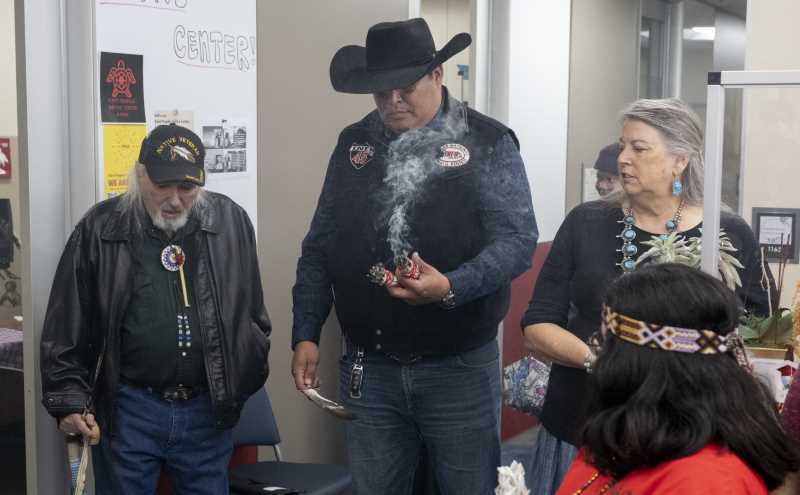 Because it is located in the Equity Center, students will have access to academic counselors, Math and English tutoring, a computer lab, study space, social workers, as well as any and all activities, including field trips and equity speakers that are brought to campus. 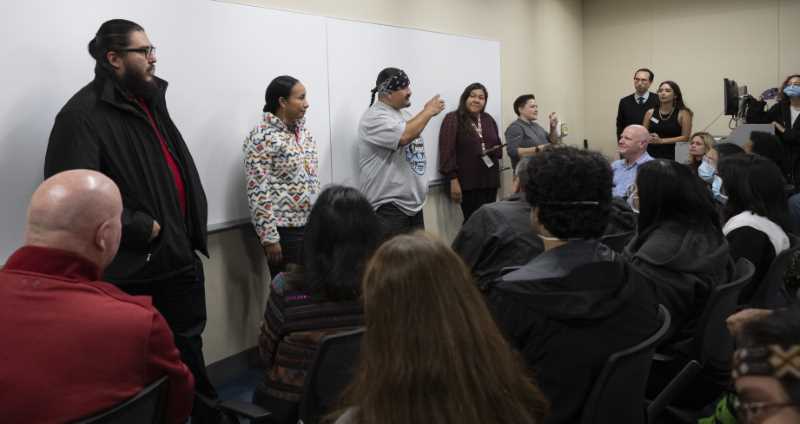 At the Grand Opening event, native alumni, tribal leaders and college staff spoke, noting it is now Native American Heritage Month. The event featured the burning of sage (or smudging), drumming, dancing by those in attendance, and a blessing from a tribal elder. 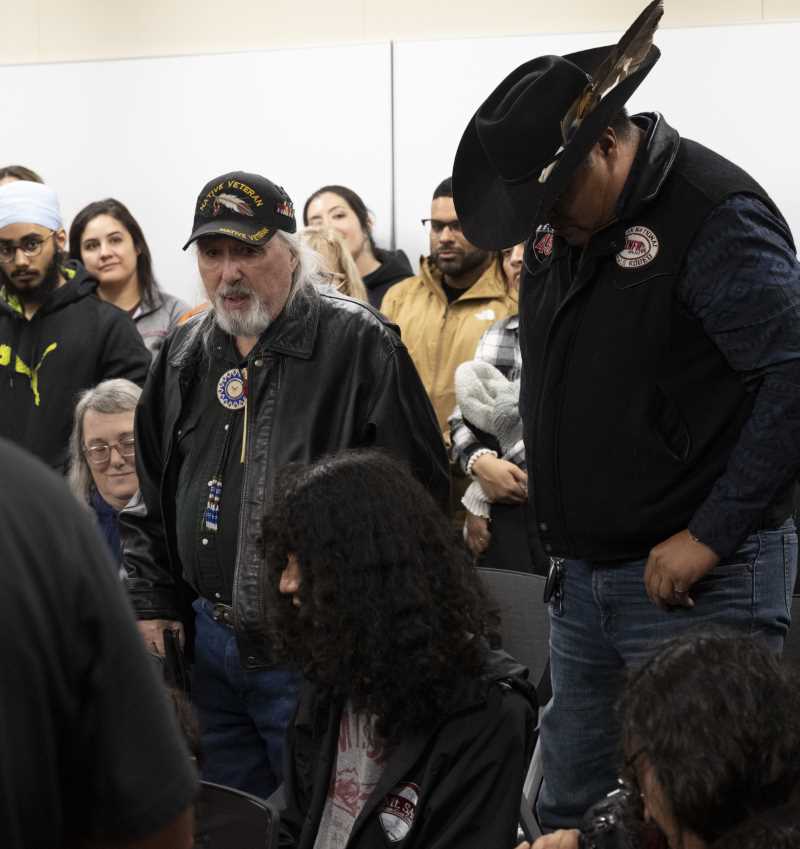 That elder, Robertjohn Knapp of the Seneca Tubatulabal and Ohlone, said that the term “first peoples” is a misnomer. “We are the original people. It wasn’t a race to get here. We were already here.”

Watch a part of the drumming and dancing in this video. 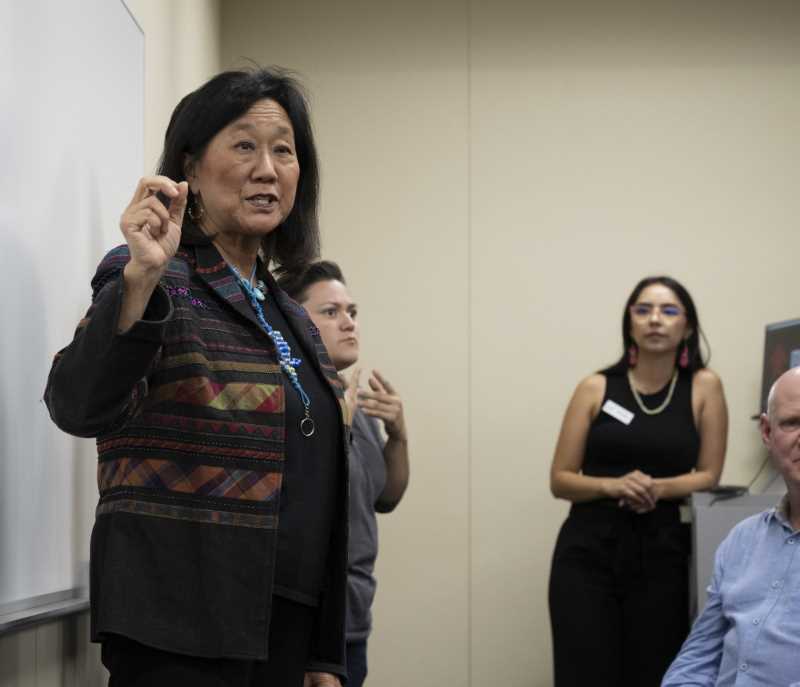 While the student organization Native American Intertribal Student Alliance (NAISA) had brought together native students on campus for more than two decades, the work to create the center really began when Vice President of Student Services, Audrey Yamagata-Noji, read an article that said college enrollment of native students had dropped 60 percent over the past 10 years. She then directed the Student Equity Committee to investigate and see what could be done. 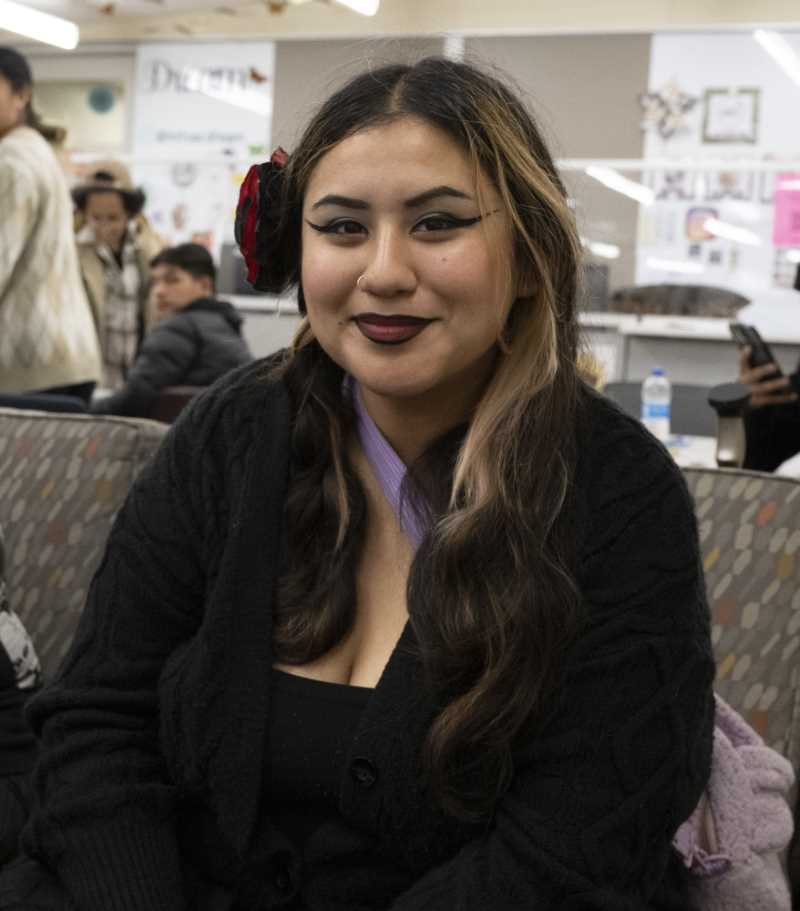 Jeszabel Millan, an English major who has been a member of NAISA since she began attending Mt. SAC before the pandemic, said, “We have been rallying forces for four years to make this happen.  This was definitely a collective effort and it took a long time.” 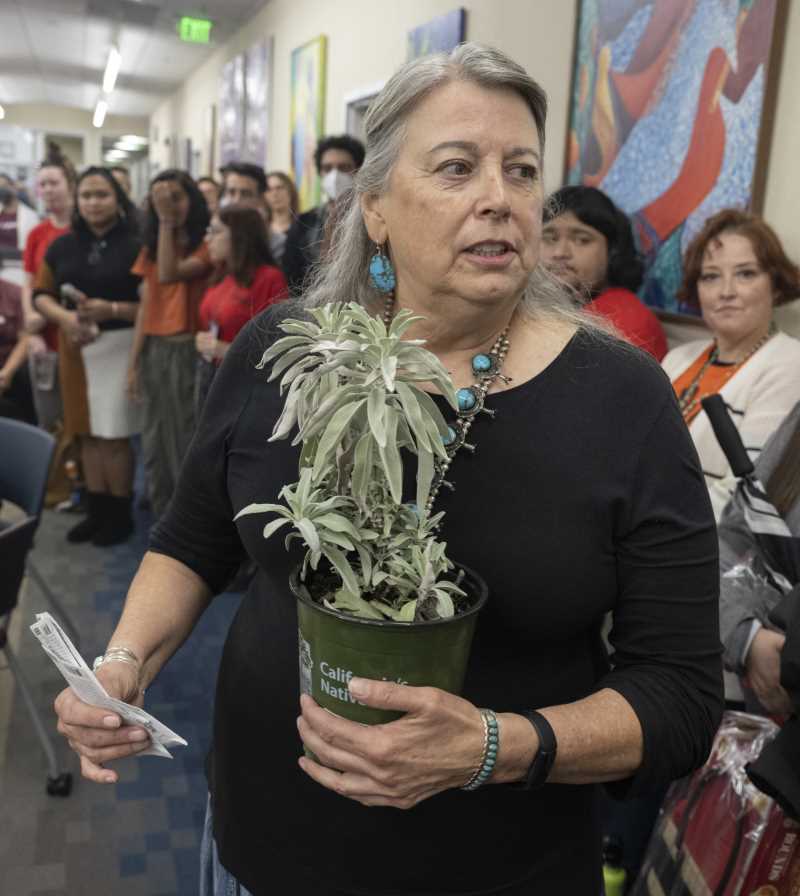 According to Anthropology Professor Dr. Frances Borella, NAISA has been working to get something like this center since before 1999, when she joined the college. “NAISA was the only home Native Americans had on this campus for two decades and the only way these students could find other Native Americans to associate with.”

“We just borrowed (Dr. Borella’s) classroom to meet or we had functions at her house,” said 2001 alumni Jayson Brave Heart, who was part of NAISA and today owns a casino consulting business and is involved in the Indian National Finals Rodeo. 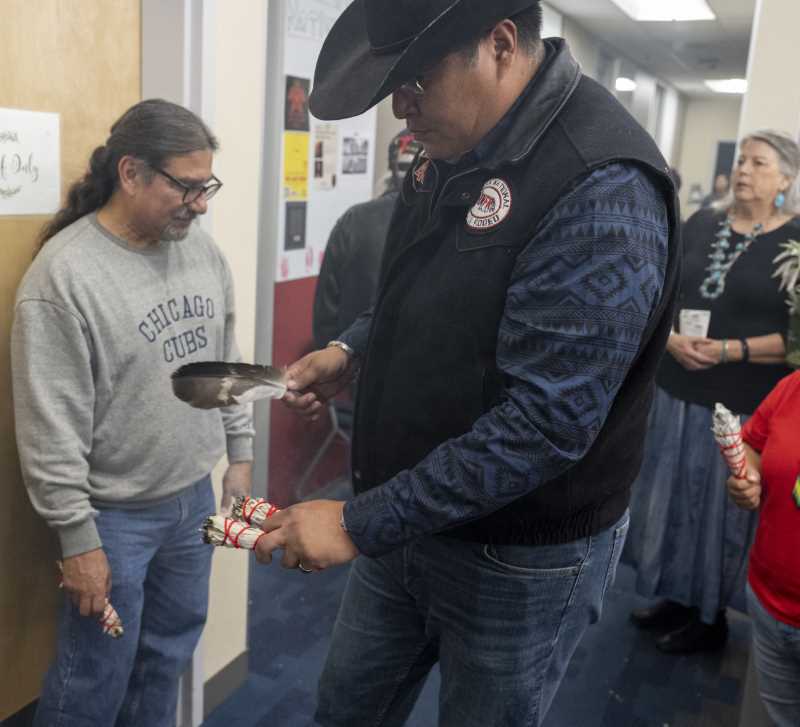 “Twenty years ago, we were always discussing how can we get a spot or a space on campus. We would come across other native students on campus, and we had nowhere to send them,” said Brave Heart.

“We put the college’s Research Department on this and found that we have about 1,400 students with Native American or Alaskan Native ancestry,” said Lara. “We then approached NAISA to ask them what they want from this campus. One thing they wanted was a center for native students. So, there was a need. Why should we not bring a center for our native indigenous students, just as we have DREAM and ARISE?” 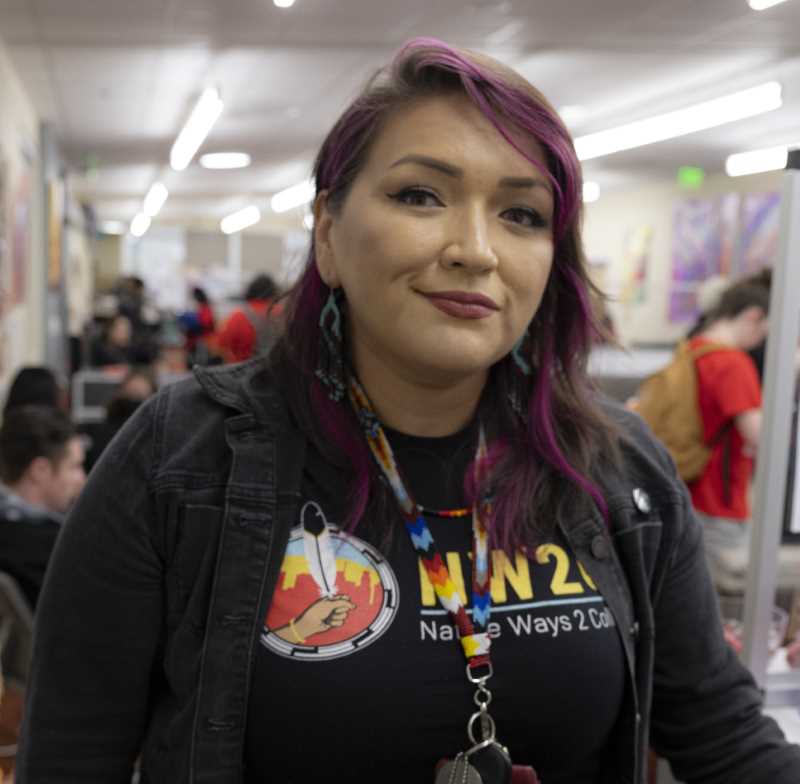 Jamie Rocha, a current Graphic Design student who already has her AA-T in Journalism and serves on the Gabrielino-Shoshone tribal council, said, “We were often seen as historical or past-tense, and we were kind of invisible. We are here and there is a lot of us, but we’re vastly under-acknowledged." 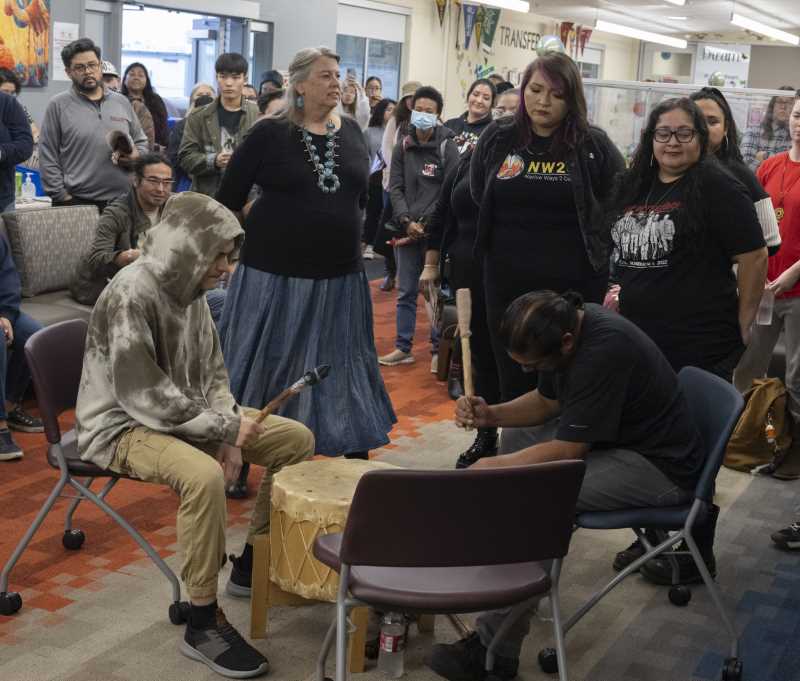 Borella explained, “Right before the pandemic hit, the article came out and pieces started falling into place. Then the administration started putting resources behind this to make it happen.”

Rocha said, “I feel like the center is a great accomplishment in just having a space for them to congregate and learn about themselves and their culture." 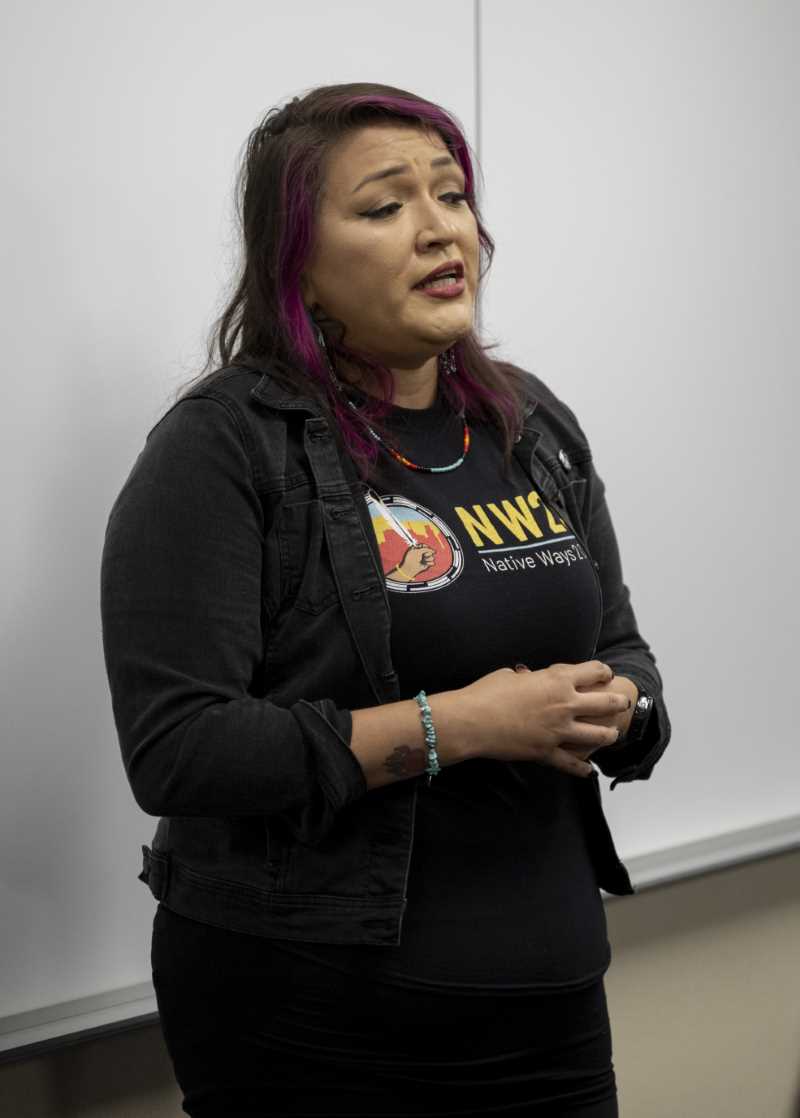 "A lot of our culture has been destroyed, a lot of our language was destroyed and we’re still picking up the pieces to this day.  If my school doesn’t recognize me as indigenous, how can the world?” asked Rocha.

For the future, Borella would like to see the Center expand and get a native garden, as well as a ceremonial space outdoors. 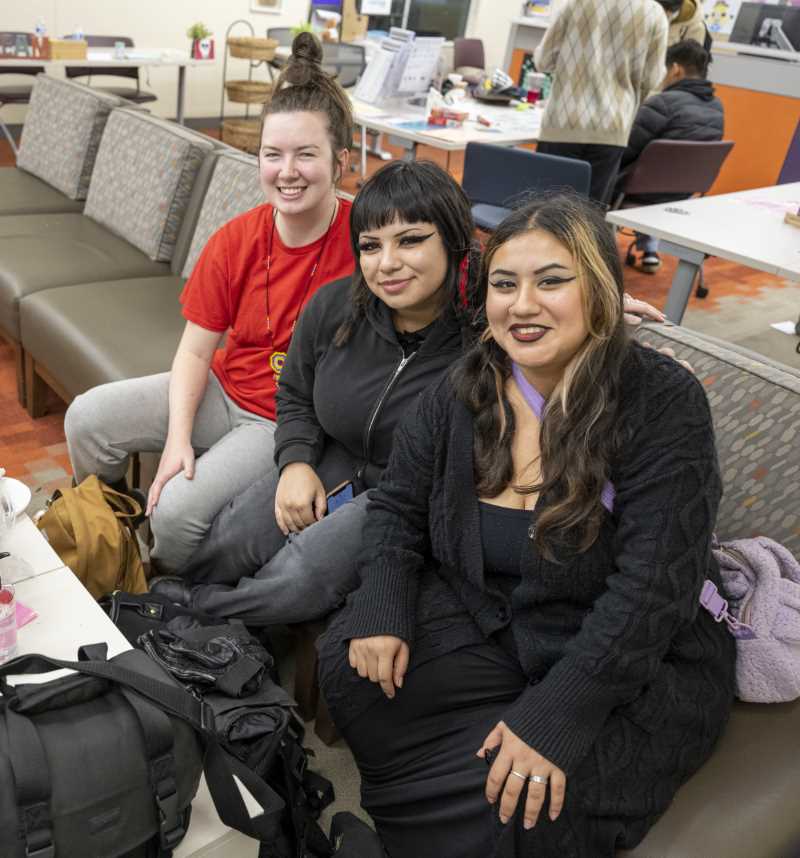 “Our people are looking seven generations ahead,” said Milan. “It’s part of our culture. So, we are much more focused on what will come after us.”

Lara said the First Peoples Native Center will also be working to get a director for the center, as well as a formal land acknowledgement for the campus, “Not just words to be spoken at events, but an actual landmark on campus to signify that we are on Tongva land.”

“We also want to have native art depicted on campus somewhere,” said Borella.

Milan said she hopes in future generations that there are, “more native people in academia, more native professors on campus.” 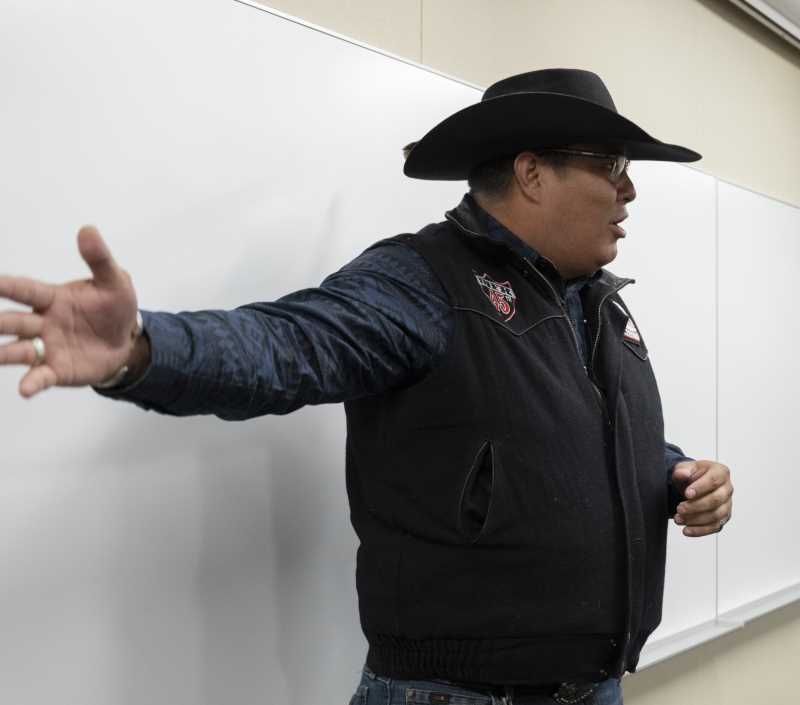 Brave Heart said he most certainly could have used a center like this back when he was a student; but nevertheless, “with the way the world has been going, I think this came at just the right time. There’s been a lot more press and national news on what is ‘native’ recently, and I think it will be respected by more people. So, I think it’s perfect that this happened today.” 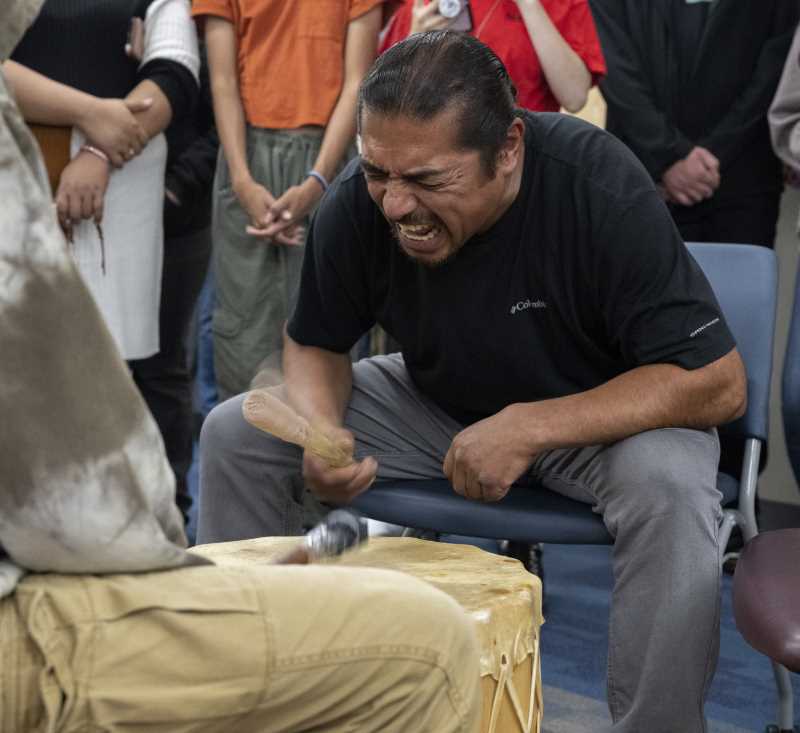 2019 Alumni Anthony Cesnea, who along with his son performed the drumming at the event, had a very difficult time in college before transferring to Cal Poly Pomona. He dealt with personal issues as well as homelessness during his time at Mt. SAC, and said he “could have used the support system that the new center will provide students. Hopefully my son, when he turns 18, comes to Mt. SAC.”

Find out more at the First Peoples Native Center website, including a scholarship opportunity and an upcoming Basket Weaking tutorial on November 17, or contact the center through their email or call (909) 274-4378.