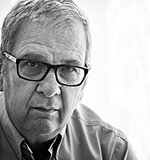 Richard has been in charge of Mt. SAC’s technical theater areas since 1998 and he has designed the scenery since 2001.  Previously, he has worked as the production manager at Columbia College School of Dance in Chicago and at Centre East in Skokie, Illinois.  His articles on technical theater have been published in Dramatics Magazine.  His M.F.A. is from the Playwright’s Workshop at the University of Iowa. As a playwright, his scripts have premiered at Actors Theater of Louisville, GeVa Theatre, Victory Gardens Theater, Steppenwolf, Mixed Blood, the Eugene O’Neill Center and many other venues. He is published by Samuel French, Heinemann Books and Dramatists Play Services, Inc.

His plays The Bug and The Death of Zukasky were premiered at Actors Theatre of Louisville’s Humana Festival, and both plays continue to be produced nationally. The Bug has been translated many times for productions in France, Germany, Greece, Spain and Italy.