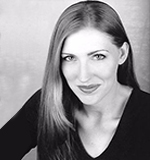 Christine has been a theater artist for over twenty years, performing, directing and teaching at the collegiate and professional levels throughout the Chicagoland area and Southern California. Christine has also taught in the Conservatory program at The Laguna Playhouse since moving from Chicago where she served as the Education Director for the Actor Training Academy @ Citadel Theater. She has a bachelor’s degree in Theater Arts from Cal State Fullerton and a master’s degree from Illinois State University in Acting.

Christine has also worked in radio Voice Over with Great Plaines Media in Bloomington, IL and was the Production Coordinator for the independent feature film Using with Phenom Features.  Most recent performance credits include Avery Bly in Sin with The Garage Theater of Long Beach, Jacqueline in STAGEStheatre’s production of Don’t Dress For Dinner, Rosalind in Shakespeare’s As You Like It with Alchemy Theater and the world premieres of Fraternal Instinct and Cold Cold Feet with Diamante Productions in Chicago.

As a stage director, Christine has directed multiple productions including Blithe Spirit and No Exit here at Mt. SAC, Tartuffe at Aurora University, Crimes of the Heart at Illinois Central College, the musicals Hello Dolly! and Once Upon a Mattress and Pride’s Crossing at Elmhurst College where she received Best Director honors.