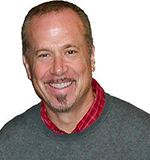 A well-known voice in broadcasting, Phil Hulett is a Los Angeles radio fixture heard on various radio stations since the late 1970s: as morning news/talk host at KFWB News Talk 980, morning news man at KBIG and KHTZ (now AMP Radio), and a DJ at Pure Rock 105.5 KNAC. Phil’s voice can be heard all over the world on his variety talk podcast Phil Hulett and Friends, as well as radio and television commercials, top-selling video games, corporate presentations, explainer videos, kiosks and events.

Phil was a key player in the dot com revolution.  In 1998 he co-founded Internet-Only Radio Station KNAC.COM, and was a founding member of Enigma Digital where the digital music delivery model was developed and various channels streamed to several million early adopters of live, online music radio.

Phil has won several broadcast-related awards including Golden Mics, Tellys and Addys. He is a Director on the board of the Athletic Sports Fund of America which raises money for cancer research and for families affected by the disease.  He also teaches after-school public speaking classes to help elementary school children find their voice and gain the confidence they need in a competitive world.

Free time is at a premium for Phil, but what there is of it; he spends focused on his wife and three daughters.