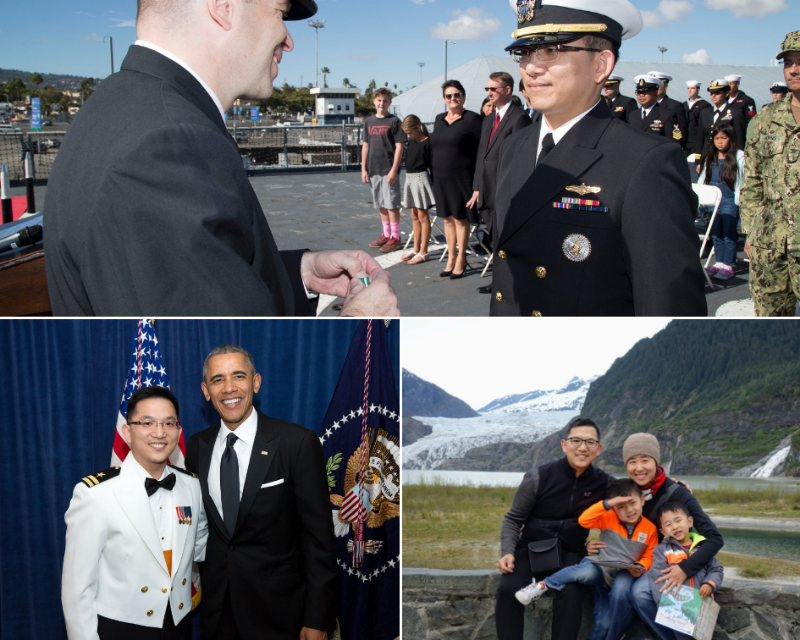 Mt. SAC Board of Trustees member Jay Chen, a member of the U.S. Naval Reserve for nine years, has been called up for his first long-term deployment. Chen will leave later this month for Kuwait to support an Army unit in Operation Inherent Resolve, the U.S. mission to intervene against ISIS in Iraq and Syria.

Trustee Chen, who represents the communities of Hacienda Heights and La Puente, is a lieutenant and serves as an intelligence officer. He will be on mission for a minimum of 270 days, but with training, could see that extended to as long as a year. Such a long-term deployment has an effect on his family, his career and his public service to Mt. SAC.

“Leaving my family is the hardest thing,” explained Chen, who has two children, aged 3 and 5.  “We are trying to get them ready for Daddy to be gone for a long time.”

Trustee Chen owns a real estate business that his wife will take over during his deployment. “She will be like a single mom, working and taking care of the kids. By far, she has the toughest job.”

Although serving in the military is a great sacrifice, Chen believes the rewards are greater than the personal and professional cost.

“I wish more people would be involved in the military,” said Chen. “What I found in military service is that you interact with so many people, of so many different backgrounds, but everyone has one singular purpose. As an Asian American, I enjoy reflecting on the diversity of our nation. There may be no other military on Earth as diverse as ours. When we serve abroad, we are all ambassadors to our country.”

Although the board is divided into seven trustee areas, Chen does not believe the communities in his area will suffer as a result of his deployment. He said the entire board is very involved throughout all areas of the region and programs on campus.

“Each board member is always thinking of the entire student body and the best way to serve the educational needs of the entire region, not just their area,” said Chen.