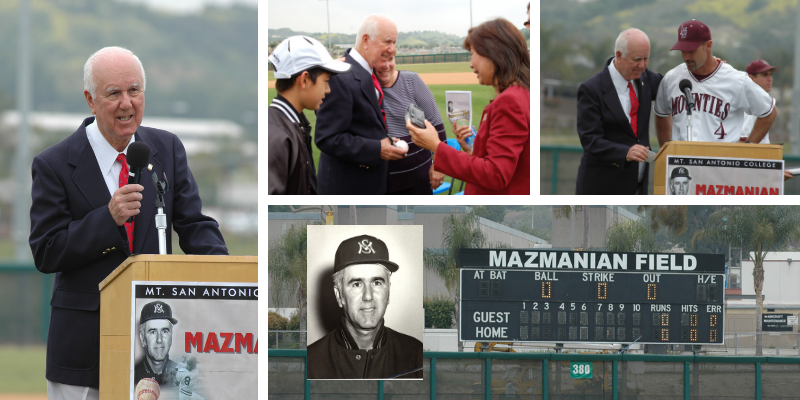 Mt. San Antonio College is mourning the loss of legendary baseball coach Art Mazmanian, who passed away on March 22, 2019 at 91 years old.

Mazmanian coached Mountie baseball for 31 seasons, from 1969 to 1999. In that time he notched 709 wins and had only two losing seasons. He spent his summer managing rookie teams for several major league organizations and was the only community college coach for the 1984 US Olympic Baseball Team. He mentored countless players, coaches and managers, and helped more than 120 players transition to the professional ranks.

“He was one of the most beloved people on the planet,” said Debbie Cavion, associate athletics director at Mt. SAC, who had coached soccer on a field adjacent to Mazmanian. “He was a beautiful soul who only had kind things to say. People from all over the country knew him and loved him.”

In 2006, Mt. SAC dedicated its baseball stadium in the retired coach’s honor, dubbing it Mazmanian Field.

Before joining Mt. SAC, Mazmanian was a high school baseball coach at his alma mater Dorsey High School in Los Angeles. He also played at the University of Southern California, where he was an All-American and a part of the 1948 national championship team. He then signed with the New York Yankees, playing professional baseball for six years and reaching the Triple-A level.

“We are deeply saddened to hear of the passing of Coach Mazmanian,” said Mt. SAC President Bill Scroggins. “Coach Maz was an inspirational leader on and off the field. He was dedicated to Mt. SAC and the craft of baseball, but most of all, he was passionate about his students. People of all ages learned a great deal about baseball and life from this incredible man. On behalf of the Board of Trustees and the entire Mt. SAC family, we extend our condolences.”

Mazmanian is predeceased by his wife of 55 years, Shirley. He is survived by their son Steve, daughter Nancy and daughter-in-law Susan. In lieu of flowers, the family requests that donations be made to the Mt. SAC Foundation (givetomtsac.org) and choosing from the dropdown menu Art Mazmanian Memorial Fund or mail a check to the Mt. SAC Foundation with Art Mazmanian Memorial Fund in the memo line 1100 N. Grand Ave., Walnut, CA 91789.

Memorial services information is below: