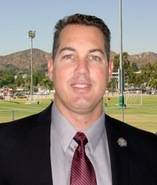 Joe Jennum officially became Mt. SAC's Division Dean and the fourth Director of Athletics on August 2nd, 2010.  He leads one of the most comprehensive and powerful community college athletic programs in the state and arguably in the country.

During his time as Associate Athletics Director, the Mountie Athletic Program consistently finished among the top six in the NATYCAA Cup. Mt. SAC captured the title during the 2008-2009 school year and has finished 2nd four other times during this tenure.

Jennum previously administered all of the programs within the Exercise Science/Wellness Center and Community Education Strength and Conditioning programs.

Jennum serves on numerous statewide and regional committees for the California Community College Athletic Association (CCCAA). He was formerly the State Track and Field Management Council Representative for six years and as the President of the National Central Football Conference for 4 years. He currently serves as the South Coast Conference Men's & Women's Swimming Administrative Representative and has previously served as the South Coast Conference Men's and Women's Basketball, Men's and Women's Golf, Cross Country and Track Management Representative. Jennum was also recently elected to the Executive Committee for the National Association of Two-Year College Athletics Administrators (NATYCAA).

At Mt. SAC, Jennum taught various theory and activity courses and has served as an Assistant Volleyball Coach for the Men’s Volleyball Program.

Jennum received his Bachelor’s Degree in Kinesiology, with a Minor in Physiology, from Cal Poly Pomona, where he was a varsity member of the Broncos Men’s Basketball and Soccer Teams.  He received his Master's Degree in Exercise Physiology from Cal State Fullerton.

He currently resides in North Orange County with his wife Tracey (Johnson), a former NCAA Division I Volleyball Player and their 2 young sons, Eli and Brody.  In his spare time, he enjoys spending time with his family, coaching, golfing and is an avid sports fan.