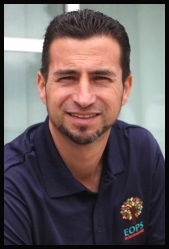 “Community College saved my life,” says Hector at every information session. The statement comes from the point of view of a student from an “inner-city” Los Angeles high school. English was not his first language and academics were not his strong suit. But having learned through athletics that with practice he could get better at anything he found his way to community college. In community college, he developed his academic and social skills until he found himself sitting in the office with a Transfer Counselor. That counselor changed his entire family history by encouraging him to consider transferring to UCLA.

Now, Hector has a Bachelor's and a Master’s Degree making him the person with the most formal education in his entire family. He was motivated by seeing his parents hard work ethic and he put that same work ethic in the classroom. But he acknowledges he did not get through college on his own. He used all the support services the college offered to support him in becoming a First Generation College graduate.

His counseling philosophy is based in Rational Emotive Behavior (REBT) and Multiracial Feminist Theory. His goal is to support students in achieving their goals. He believes race, class, age, gender and sexuality all impact the person as they interact with the expectations of Higher Education. He is aware students arrive at community college for many reasons and believes it is his role to assist students in identifying how they, too, can use Community College to change their family history!

Currently, Hector lives in Pasadena, CA with his wife (also a First Generation colleges student) and two children. Reports he is living “The Dream” by having a career that is personally enriching and has allowed him to move up the socio-economic ladder. Hector is fluent in Spanish.