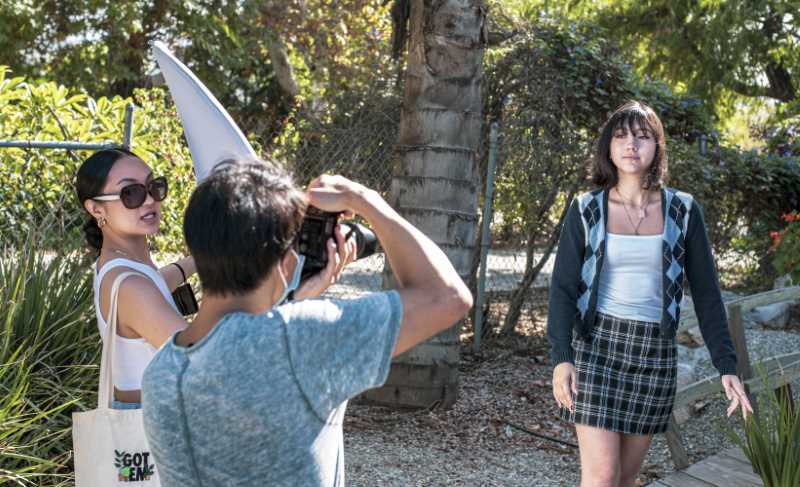 The Photo and Fashion Society clubs on campus teamed up over at the Horticulture unit to gain experience shooting (for the Photo Club) and modeling clothes (for the Fashion Club). 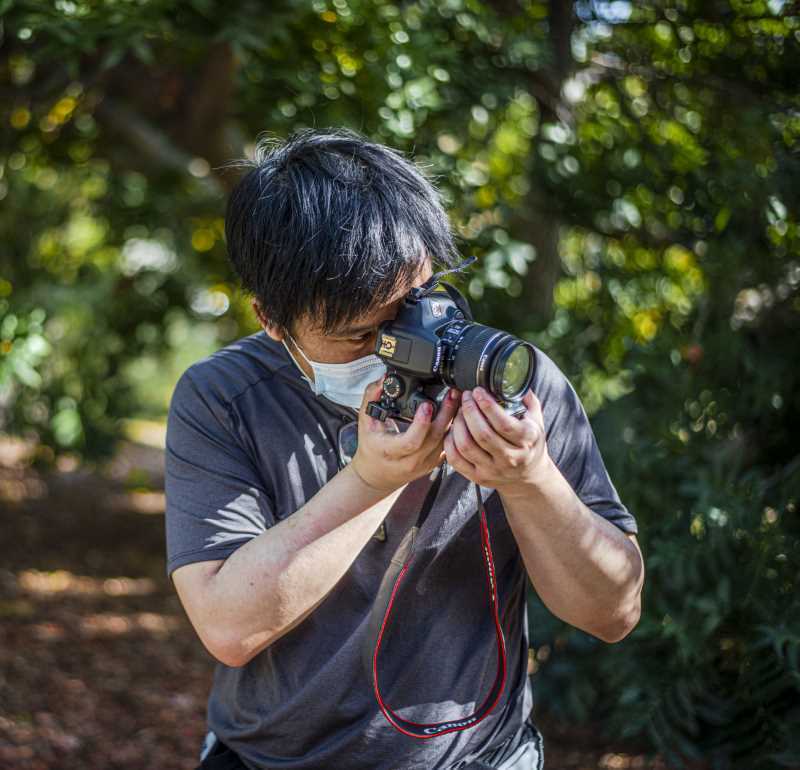 In another part of the campus, other Photo Club members were shooting portraits of a third club: El Centro.

But over at Horticulture, the photographers were tasked with choosing complimentary or eye-catching settings, setting up lighting and using their camera to capture just the shots they wanted.

Photo Club advisor and Professor of Photography JP. Morgan was on hand to give tips and help the students. "These club collaborations are a great way to work," Morgan says. "They bring the models, and we bring the photography and equipment, and then we shoot away." 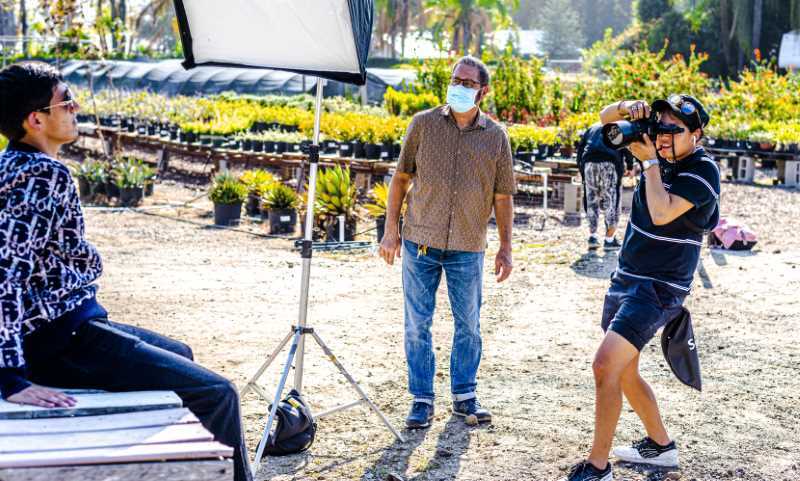 Morgan said the event came about when Photo Club president Meg Moore reached out to the Fashion Club for its members to show off some of its designs and to model those designs. 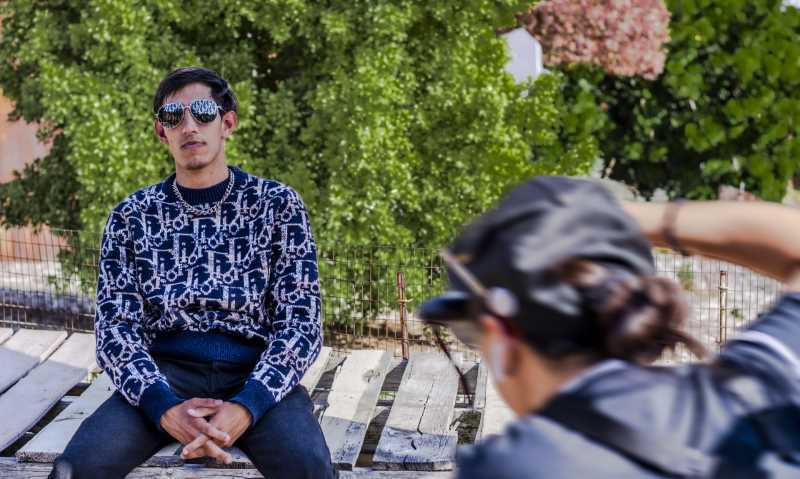 Garen King is part of the Fashion Club, but is studying to become a Dental Hygienist. He says he found the club at the Join-a-Club event in the middle of campus. Walking up to the club's table, he told the members, "I only wear band shirts and jeans." Their response, he says, was, " 'That is valid'. So, I'm in." 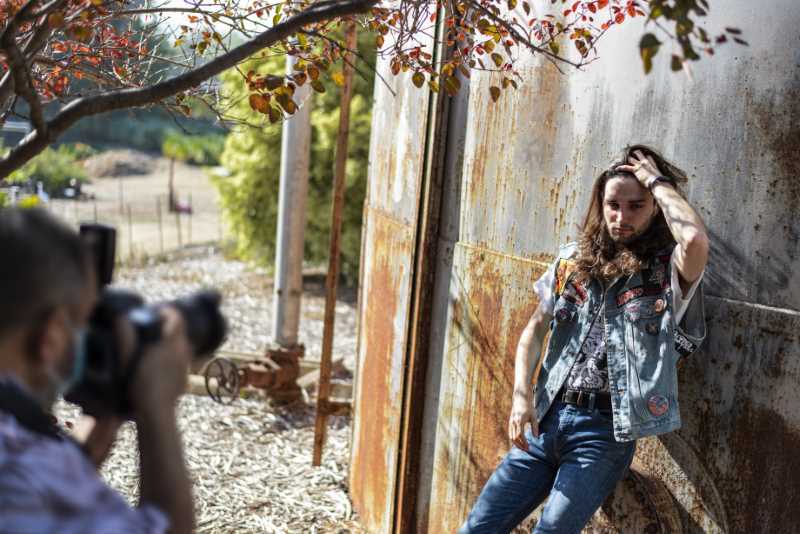 Garen modeled a couple of different outfits, including his personal creation - a custom denim vest in the vein of 80's thrash metal 'battle vests'. 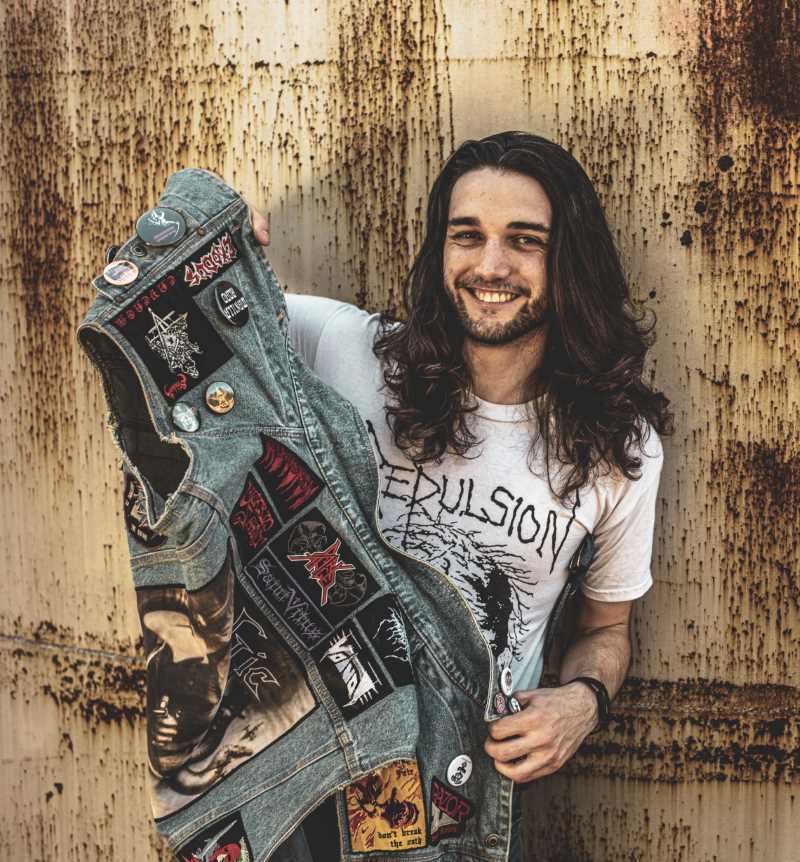 Showing off his jacket, Garen says he bought a "cheap thrift store vest" and began "paying a lot of money" hunting down the metal and punk patches and buttons (all color coordinated, he says) that adorn it: everything from first generation L.A. thrash metal band Dark Angel, on to black metal pioneers Mercyful Fate, all the way to the seminal hardcore punk band Dead Kennedys' button that adorns the collar.

Garen says he has had the vest, "for two years and never washed it. It still smells like the Slayer pit." 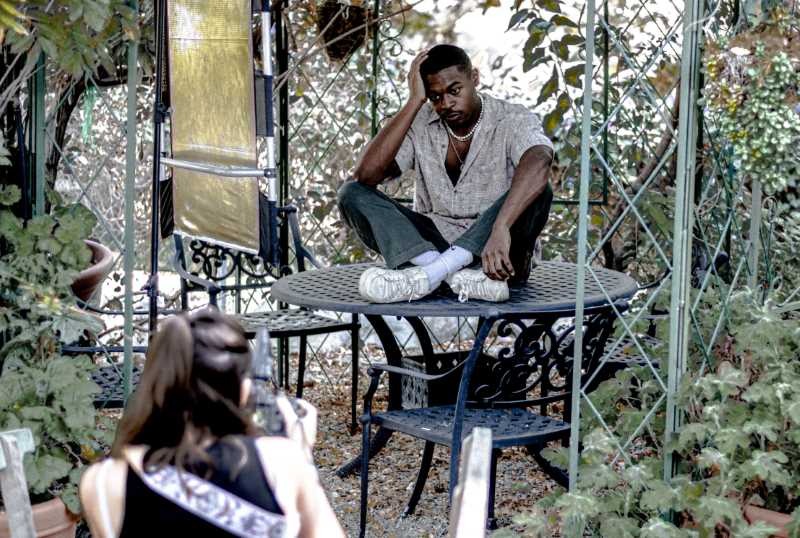 Photo Club Secretary and Photography major, Ashley Walsh says she joined the club to be around other photographers.  "It's a cool way to connect with people who have the same interest as you."
As for the collaboration (or 'collab' as they have come to be known on social media), Ashley says both groups will get something from the experience. "As photographers, we get portfolio pieces from the shoot, and they (Fashion Club members) get samples for their own portfolios." 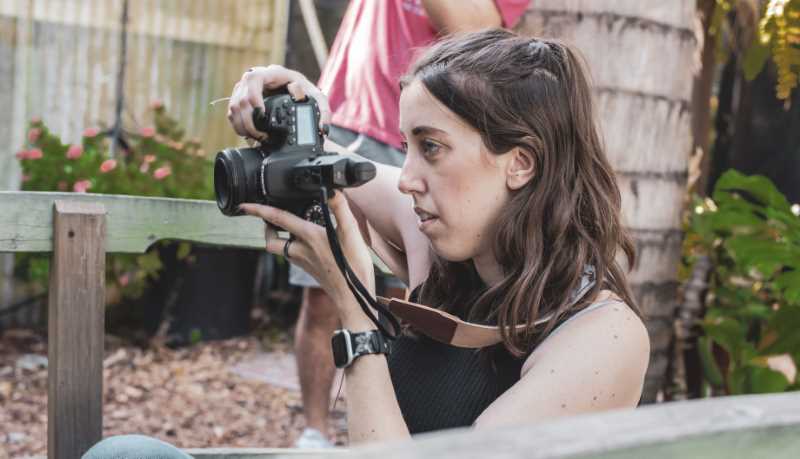 "The photo department is all about reaching out and working with other departments on campus," Morgan said. "Just about everyone needs photography, and that's what we do." 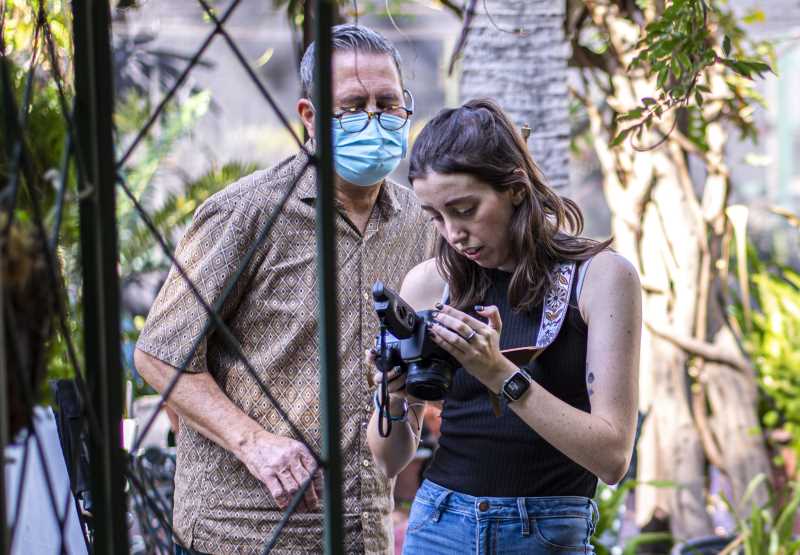 One of Ashley's Fashion Club subjects was Michael Samai, who is a Graphic Design major who would like to work in the fashion industry.
Michael loved the setting at the Horticulture unit, "I've been going to Mt. SAC for two years, and I didn't even know this was here. My friends and I have been looking for a garden area to shoot something in." 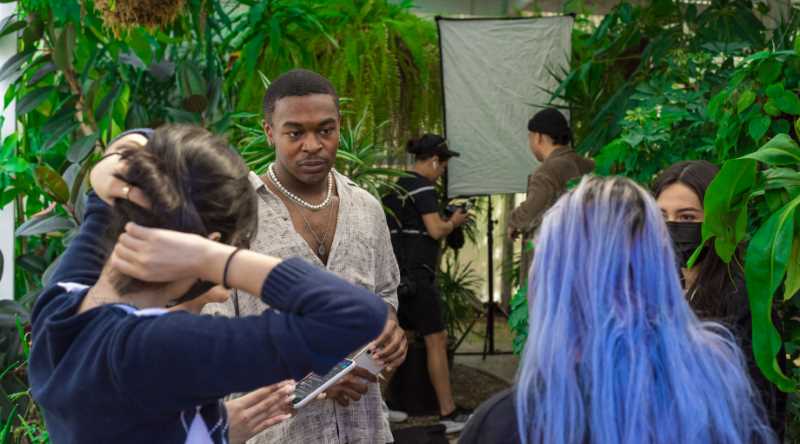 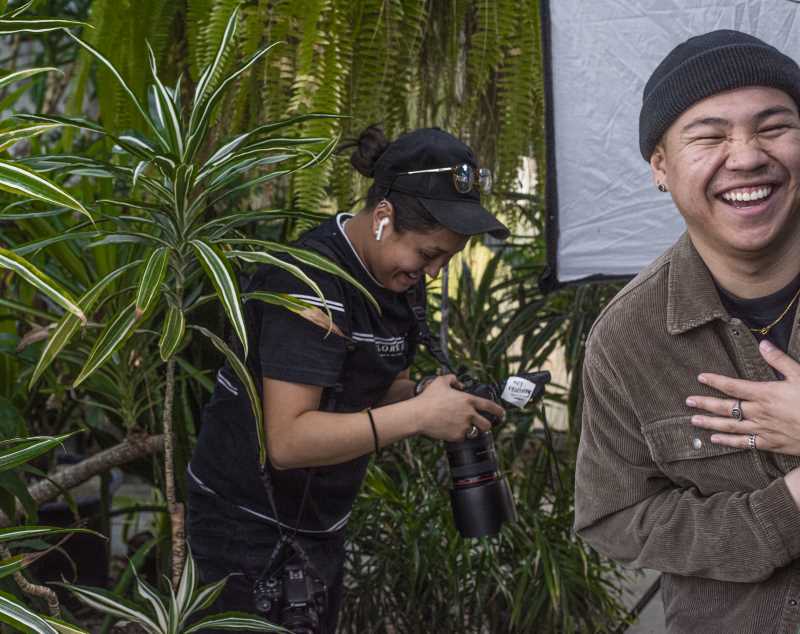 Find the Photo Club at: instagram.com/mtsac_photoclub/ 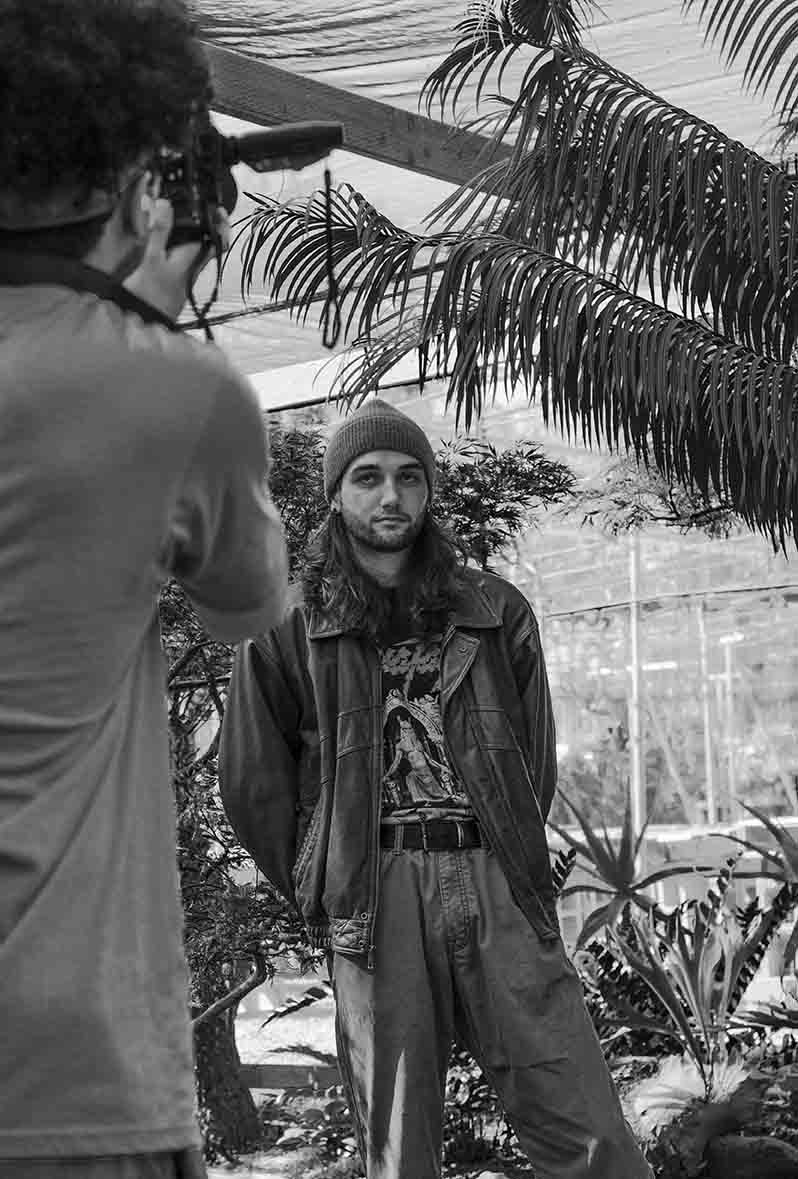