What is Mt. SAC building?

Mt. SAC is building a 2,085-space parking structure. It will be built on what is currently a parking lot. 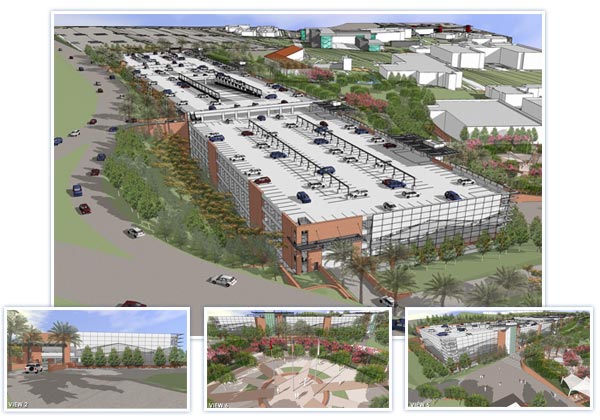 Why is Mt. SAC building a parking structure?

The addition of spaces in the parking structure will resolve the present parking crunch and provide some capacity for future growth.

Mt. SAC served 54,000 students from throughout the district last year. Currently, there are a little over 7,200 parking spaces at the college, while the maximum number of students on campus at any given time is just over 9,500.

Who is this parking structure going to serve?

Of the 2,085 spaces, the vast majority are for students. Approximately 125 spaces will be available for staff members.

Where is Mt. SAC building the parking structure?

The site is located at the northwestern edge of the campus, bordered by Edinger Way and Mountaineer Road to the north and northwest, La Puente Drive to the east, and the campus to south. The site is currently a parking lot. 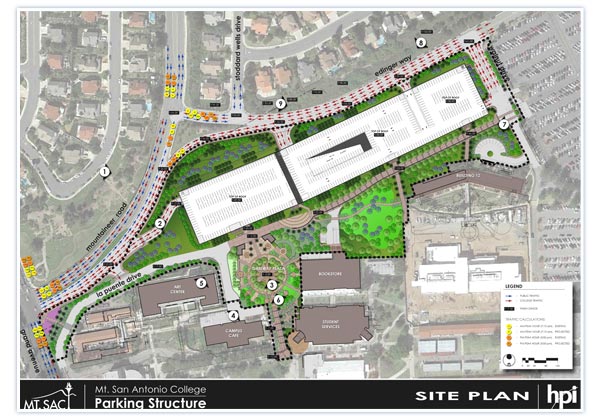 When did construction begin on the parking structure?

How is the parking structure going to look?

The parking structure will be five levels on the west side, decreasing to only two levels on the east side, to protect neighboring residents’ sightlines.

The design of the parking structure includes significant enhancements to improve or enhance the exterior appearance, including an extensive landscape plan with large trees and a metal screen system to give the exterior the look of an educational building.

Why is Mt. SAC building the parking structure at the north end of campus?

The selected site provides parking near the existing student classrooms where parking is needed most. It is the only site that meets the Measure RR goals of improving parking, traffic and pedestrian safety. The selected site allows the parking structure to be built below the sightlines of the neighboring homes, and will not affect the structural integrity of the hillside. In addition, the site selected resulted in the lowest overall environmental impact.

What other locations were considered?

Why didn’t Mt. SAC choose Lot F or a lot on the south side of Temple near the athletics fields?

The selected site provides parking near the existing student classrooms where parking is needed most and is the only site that meets the Measure RR goals of improving parking, traffic and pedestrian safety.

What is the timeline/phases for construction?

Phase 1 will consist of demolition, underground utility improvements and earthwork. Phase 1 began in March 2015 and will last approximately 6 months. Phase 2 will include building and site construction. It will begin in July 2015, and require approximately 18 months to complete. We expect to be able to begin using the structure as early as January 2017.

What is the cost to build the parking structure?

$48.5 million. Related work, such as the addition of a bike lane at Grand Avenue and temporary parking lot M, brings the construction budget to about $52 million.

How is the college paying for the parking structure construction?

Proceeds from the Measure RR bond, passed by voters in 2008.

Who is in charge of approving Mt. SAC construction projects?

Does Mt. SAC consult with the City of Walnut on its construction projects?

How did Mt. SAC and the City of Walnut work together on planning for the parking structure?

A number of meetings were held with the city planning and engineering staff to ensure that Mt. SAC was in compliance with city requirements. In 2007, Mt. SAC worked with city staff to develop a presentation to the Mt. SAC Board of Trustees identifying options to improve traffic around the campus, including the expanded use of the Mountaineer Road entrance to the College by locating the parking structure.

Did the City of Walnut voice any opposition to the plans for the parking structure? 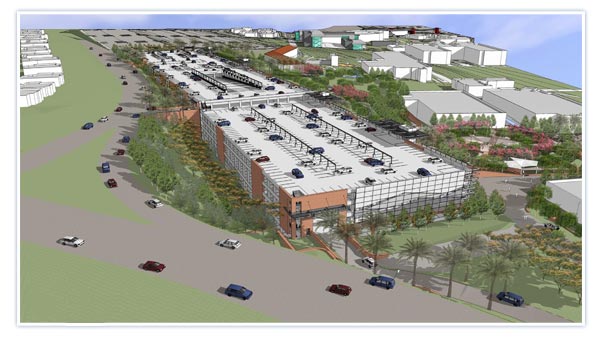 What is Mt. SAC’s student population?

How many students are on campus at one time?

During the span of the day, the maximum number of students on campus at any one time is 9,577. This figure is based on an hour-by-hour analysis conducted on the first day of the Spring semester 2014 and occurred at 10 a.m.

How will the new parking structure impact traffic in the area?

Traffic impact is minimized by allowing students traveling southbound on Grand Avenue and westbound on Temple Avenue to access parking on campus while avoiding the most traffic-bound and problematic intersection in the area at Grand and Temple.

What about traffic jams at peak hours?

The structure can take 1,900 vehicles per hour; so, in just a little over an hour, the entire parking structure could be filled, without any cars spilling over on to the side streets.

What mitigations did Mt. SAC make?

Mt. SAC has elected to add a right-turn lane and bicycle lane improvements at the northbound Grand Avenue and Mountaineer Road intersection.

How long will this parking structure address the campus’ needs?

This project should provide enough parking for students until at least 2025.

The project includes public safety enhancements for security including a video surveillance system.   Also, the same blue emergency phones that are around campus will be on each level of the parking structure.

Is there sufficient lighting for the parking structure?

The minimum light levels right now is one foot candle in other areas of campus; but, the plan for the parking structure is about five foot candles. Also, the lighting can’t be so bright as to disrupt the neighbors.

Will the general public be able to park there for theater events, etc.?

Yes, it will be the same as any other lot on campus. There will be ticket dispensers.

Will there be a parking attendant?

No, there will be a kiosk where one can purchase a parking permit for the day. 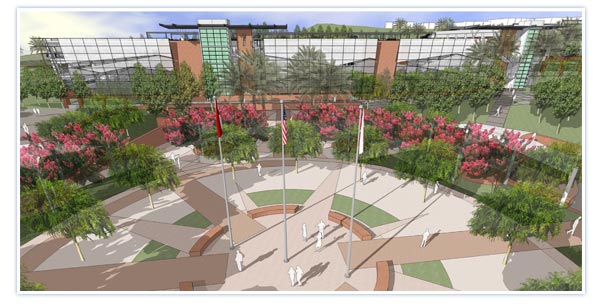