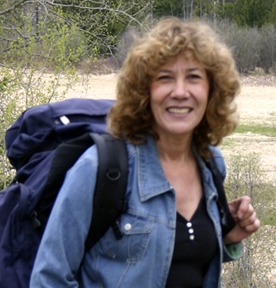 As far back as she can remember, Betty (actually Elizabeth Jean Billups) has always gravitated toward art.  The earliest she can recall goes back to third grade, staying after school to draw a picture of St. Francis with all the animals. Then the following year, being nurtured by an artist, a Pima Indian Girl, Aggie Easchief who lived with her family for a year and who perhaps saved Betty from hating art due to a not-so-nice 4th grade teacher. Her first paying job was in 5th grade, when a fellow classmate paid her 50¢ to copy a card of Santa playing a pipe organ.

Throughout her first 18 years, she was asked to do bulletin boards, Christmas scenes in chalk on the board, and school annuals. Then upon entering junior college she chose art, “because nothing else in the curriculum was of interest.” Upon graduation, she went back and took short hand and typing, in order to get a job. It was the time before woman’s lib, and since the Hanson’s Art History book did not mention one woman artist, Betty assumed women could not make it in the art field.

However a nice twist of fate saved her from being someone’s secretary: A friend’s vwbug broke down, and he needed a ride for an interview at the Los Angeles Art Center College of Design. Since Betty had a scholarship there in her junior year, she was more than glad to drive him. While Dale was being interviewed, Betty again got mesmerized by the wonderful work displayed in the halls. After 2 years of professors saying how bad the school was, she had opted not to apply. When Dale’s interview was over, she asked to be interviewed. When questioned what she wanted to major in, her exact quote was: “What is the stuff in the halls?” The woman needless to say, was not impressed. However, after supplying a portfolio, Betty was given an advanced standing of one semester, & she graduated a point off Distinction, at a 3.8 grade point average.

On graduation day, her beloved instructor Joseph Morgan Henningertold her: “I think you will soon discover, that you have barely scratched the surface.” In less than ten years, she realized she hadn’t even been to the “surface” to scratch it!!! She knew so little! And that dissatisfaction lead her to an awesome painter she had looked for over 5 years: Dan McCaw. She studied with Dan for a solid 2 years, and at the beginning it was almost a Pandora’s Box, because she couldn’t do half as well as her first semesters in art school. But she finally broke through to understanding what it was her  work had been missing.

Upon graduating from the LAACCD Billups was asked to be Vice President of the Society of Illustrators of Los Angeles (SILA), and was solely responsible for organizing and publishing their annual Illustration West Book, which displayed all the top illustrations created in the western United States.

After the show opened and the book was published, and delivered in time for the opening of the exhibition (the first and only time in the history of the Los Angeles Society of Illustrators), she was awarded an Air Force trip to St. Louis, to document the C9, the Air Forces’ medical plane. An Army official seeing the painting, commissioned Billups to create a painting of Sacajawea, the Indian woman who accompanied the Louis and Clark exhibition to the Pacific Ocean, in the early 1800s.  This commission brought her out of the illustration field, back into the fine arts when she was offered a one artist exhibition at the museum in Helena Montana, at the Montana Historical Society, for the summer of 1977.

Knowing that nothing is left to merely “good luck” nor “pure talent”, (two words that she thinks are over used and over rated) Betty has a passion to share the knowledge and encouragement she has received over the years, with others seeking to find their own voice through their art.

Although she had been painting landscapes since the late ‘60s, her great passion for pleinair painting began In 1985, when Denise Burns, founder of the PleinAir Painters of America (PAPA), invited Betty to be a member, while they were in a show in Scottsdale Arizona. Denise’s dream was to not only start this group, but as she shared with Betty: “Wouldn’t it be great if small groups started all over the country, saving the vanishing landscapes of this magnificent country.” What a vision!!!

To date, she has had three one artist exhibits at museums in the Northwest, and her work hangs throughout the U.S., along with private collections in Japan, Europe & the Near East.

Doing research for the Army commission also brought her to the Northwest for the first time in 1975, and which finally won her heart over, and where she moved to a 200 acre ranch in 1986. Then in 1990, she purchased her first home on 10 acres, at the end of a dirt road, in the mountains, thirty miles from town!

Though she is not a joiner as such, she has been a member of PleinAir Painters of America since 1985, having missed only one gathering, due to her sick dog, Nellie. Upon arriving home, she actually saved her home from burning down, due to a hot wire that was turning water to steam in her pipes. Had she done the PAPA show that year, she would have lost her studio, and 33 years of art, records of over 1600 paintings, not to mention her art collection and all that she owns.

In 2005 she was commissioned by an International Publishing Company to write a 96 page art book titled:10 Projects you can Create EnPleinAir which sold out the following year in both the U.S. And Canada.(It can still be purchased on line!) Billups travels for at least 3 to 4 months each year, teaching workshops upon request. Her travels for painting has seen her on the canals of Venice,

the southwestern shores of Ireland,  the mountains and tropical towns in Mexico, and throughout the western United States. The future sees more travel throughout the U.S. and other world destinations.

Her most recent commission was received from Mt. San Antonio College,

In the spring of 2007, when she came to the campus and created a 6x16 foot mural For the Founder’s Hall, capturing the early spring views of Mt. Baldy, or Mount San Antonio, in the San Bernadino Mountains. 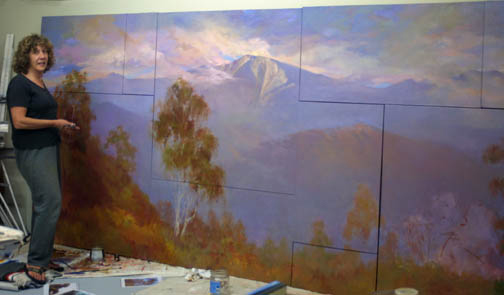